Tim Birkhead launched the 2018/9 Season in great style to a hall filled to capacity. 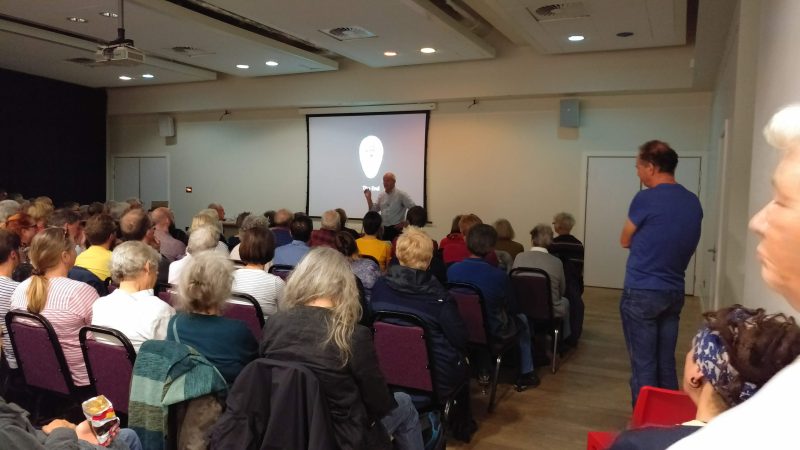 Tim delivered his information packed talk in jargon free plain English. Opening, saying that he ducked answering when reporters inevitably asked the question “Which came first the chicken or the egg”, he went on to describe the history of “Oology” (the study of eggs). The talk dealt with egg collecting from the earliest 17th Century Naturalists through to the egg collecting industry that developed in the 19th Century, lasting until 1954 when it was made illegal after campaigns by the RSPB. Tim told how the beauty of the colouring and varied shapes of eggs along with rivalry between collectors had been drivers of this passion for egg shells and the high prices they could command. He then related how scientific study over the years had begun to cast light on the origins and role of these features in the process of avian reproduction as it evolved over geologic time. Starting with the Dinosaurs from which all birds descend; as each bird species developed and adapted towards its current ecological niche its anatomy and eggs changed to maximise reproductive success.

This lead into a detailed explanation of the anatomical structures and biochemical processes that female birds employ to produce eggs of such varied colours and shapes, highlighting areas that are still speculative and remain to be elucidated in future research. As an example, he related his own team’s experimental discovery that the entry of multiple sperm into the ovum (polyspermy) was essential to the viability of a fertilised bird egg. He offered some suggestions as to why this might be, but said no conclusive answer had yet been determined.

At the end of the Lecture Tim pointed out that he had now incidentally answered the forbidden question: the answer being, neither; but the Dinosaurs came first.

Of course, one could then say: which came first the Dinosaur or the Egg, but there’s a time and a place for everything.

After the usual thoughtful Questions from our Audience; Tim said that his very long running study of the guillemots on Skomer Island, the longest continuous study anywhere, was being threatened by funding cuts. He felt that at the current time given the mounting threats to the colony, largely as a result of global warming, it was vital that the work continue. He asked that people consider donating to the ‘crowd funding’ which will finance the continuation of the research for the next 10 to 15 years.

If you wish to make a donation please use the link below.